Roon Labs’ Roon music server software is is unparalleled in terms of its performance, its robust metadata support, and its flexibility. You can integrate any AirPlay, Chromecast, or native Roon RAAT (Roon Advanced Audio Transport) speakers and other audio gear for multi-room streaming. The high-end music-streaming services Tidal and Qobuz have integrated Roon so their subscribers can benefit from the Roon’s user interface and its deep well of metadata (reviews, lyrics, artist bios, genre classifications, album credits, release dates, recording dates, and even live concert dates). And that’s just scratching the surface of what Roon is capable of.

Roon is software, so you’ll need hardware to run it on. You can run it on a headless (no display needed) Mac or a PC, or you can set it up on a high-end NAS box (Roon recommends having at least an Intel Core i3 Ivy Bridge-architecture CPU, 4GB of RAM, and an SSD to run the server software). But none of those options are aesthetically pleasing (or quiet, since they’ll probably have cooling fans), and you might run into overheating problems if you hide the gear in a closet. And then there’s the whole matter of configuring Roon itself.

Roon now offers a way to get all the benefits of its software in a plug-and-play package: Check out Nucleus, Roon’s first stand-alone hardware/software solution. I’ve been evaluating Nucleus for more than five months and found it to be a stellar solution. Unfortunately, it’s also a very expensive solution, starting at $1,399 plus the cost of storage and a Roon subscription.

Mentioned in this article

Nucleus is an audio-optimized file server that you’ll almost never interact with directly. It has no mouse, no keyboard, and no display. It’s designed for passionate music lovers who don’t have the time, know-how, or inclination to build out a computer as a do-it-yourself project.

Side view of the Nucleus’ heat sink fins.

Nucleus runs a stripped down, security-hardened version of Linux that’s optimized to run Roon. Its four-step setup is simple and straightforward, and you can run it from any web browser or smart device via Roon’s slick app (I’ll get into that more below).

Aesthetically speaking, the Nucleus looks like a giant heat sink. And that’s pretty much what its metal exterior is. The entire shell is designed to dissipate all processor heat efficiently. And it works. During my test period, I had the Nucleus on a shelf in my Salamander entertainment center. The Nucleus ran warm, but never hot. Ventilation was never an issue. 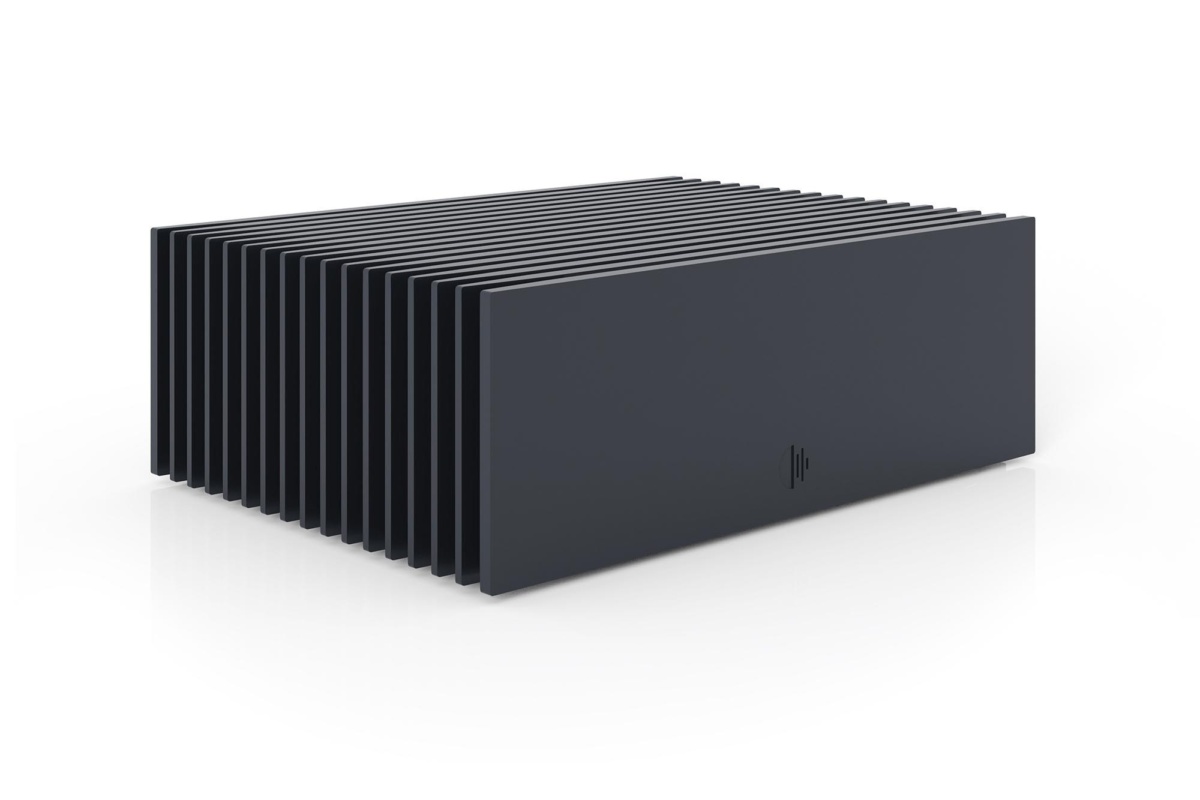 A front quarter view of the Roon Nucleus.

Put an SSD inside the Nucleus and it will have no moving parts whatsoever. It will operate in dead silence. You’ll never know you have it in your room, much less your equipment rack. If you really want to geek out, check out Roon’s white paper dedicated to the design and engineering choices made during the Nucleus’ development.

The heart of the Nucleus is an Intel NUC (Next Unit of Computing), a small form factor desktop computer, and it gives you several built-in input/output options: There are two USB 3.0 ports that you can use for connecting external hard drives and/or a DAC of your choice. The HDMI output supports stereo and multi-channel audio output. There’s a USB-C port on the unit’s rear that right now doesn’t serve any practical purpose. Roon might (or might not) enable that port for added functionality down the road.

Connecting the HDMI output to an A/V receiver or A/V preamp processor (like I did) lets you access the Roon’s web-based user interface, where you can see the Nucleus model, OS version, serial number, and IP address.

Rounding out the ports, the Nucleus has a gigabit ethernet port. Wired connections are still the fastest and most reliable way to connect a high-performance server like the Nucleus. For that reason, you won’t find a Wi-Fi adapter here. 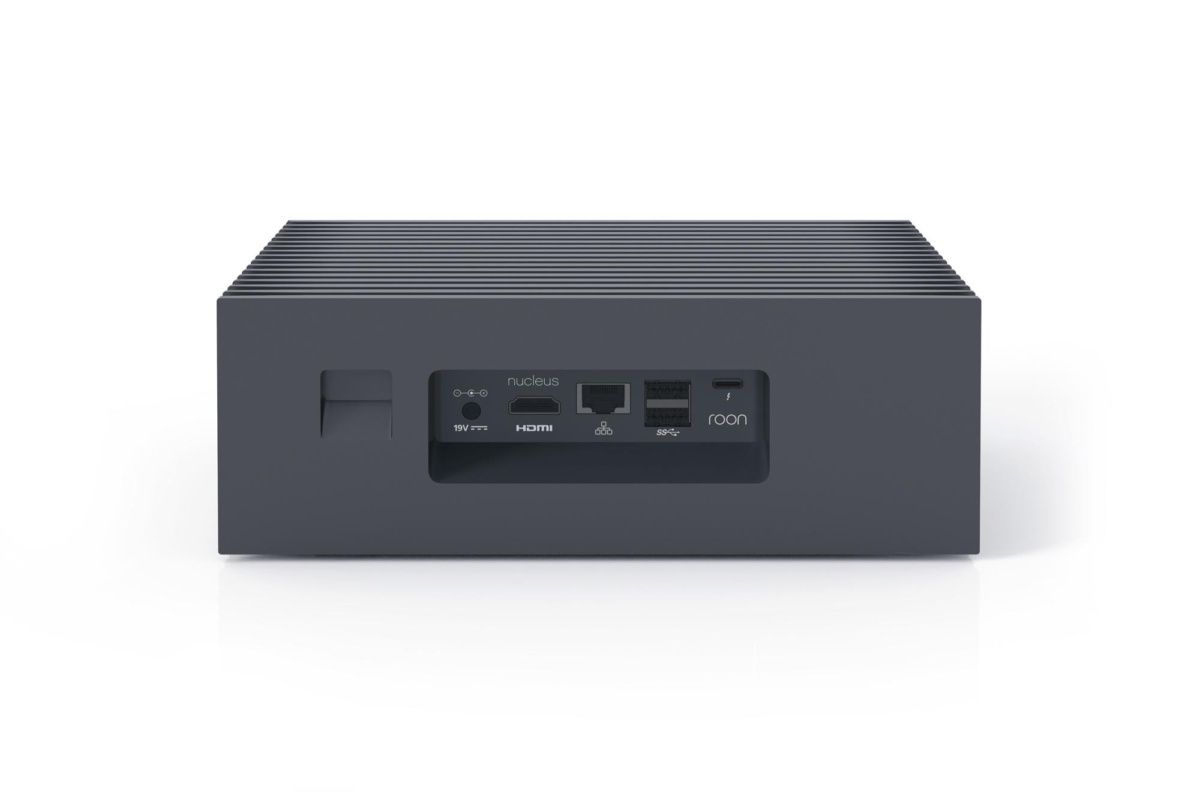 A rear view of the Nucleus.

During my review period, Roon came out with an upgrade that enables you to rip CDs directly to the Nucleus, using a USB CD-ROM. That eliminates the need for for a Mac or PC to archive your CD collection. When the Roon operating system detects a CD drive, it will add a new option called “CD Ripper.” Ripped tracks are saved as lossles FLAC files. I did not test this feature.

In addition to the USB 3.0 ports, the Nucleus has an internal bay for installing a 2.5-inch SATA SSD or mechanical hard drive that’s no thicker than 9.5mm. For my review, I purchased a 1TB SSD and installed it in the Nucleus’ internal bay. I found the process to be very straightforward with one caveat: The drive wouldn’t fit properly in the Nucleus with the drive’s mounting rails in place. 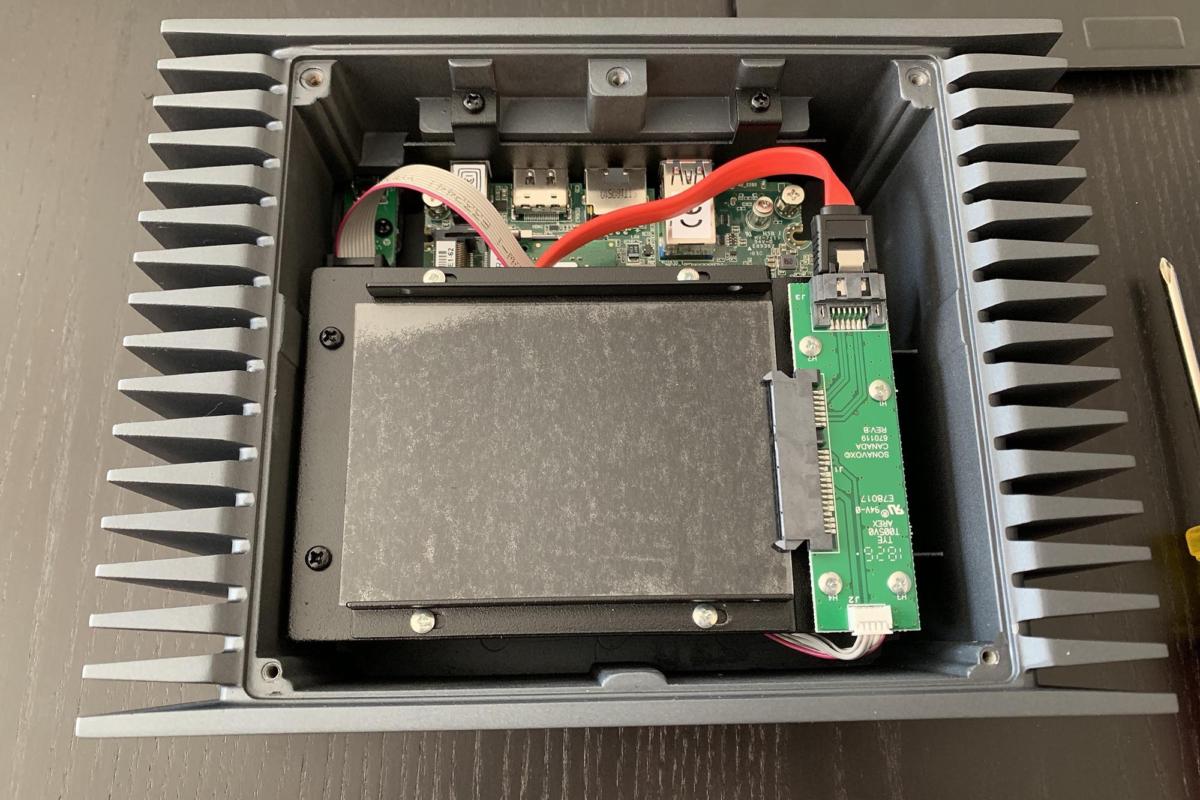 You can install a single SSD drive inside the Roon Nucleus for internal storage.

I had to loosen the rails, mount the drive, and then tighten the rails for the drive to fit properly. The tolerances in the Nucleus’ design are so tight here that I’m afraid an overly-enthusiastic consumer may try and force the drive into place, accidentally causing some damage to the unit’s circuit board. I’m not quite sure if my experience is common across other production units or specific to my review unit.

The Nucleus itself has no moving parts, so if you use an SSD, the server will operate in complete silence. This allowed me to place in my living room, where it never called any attention to itself.

The drawback of SSDs, of course, is that they’re much more expensive per gigabyte than a mechanical hard drive. A 1TB SSD costs about as much as a 4TB mechanical drive. If you have a large music library, you’d be better off using an SSD just for the Roon software, and storing your music on a separate NAS box. Roon running on the Nucleus will discover and access those files no matter where you locate the NAS box in your home, as long as it’s connected to your network. Alternatively, you could plug an external hard drive into one of the Nucleus’s USB ports. 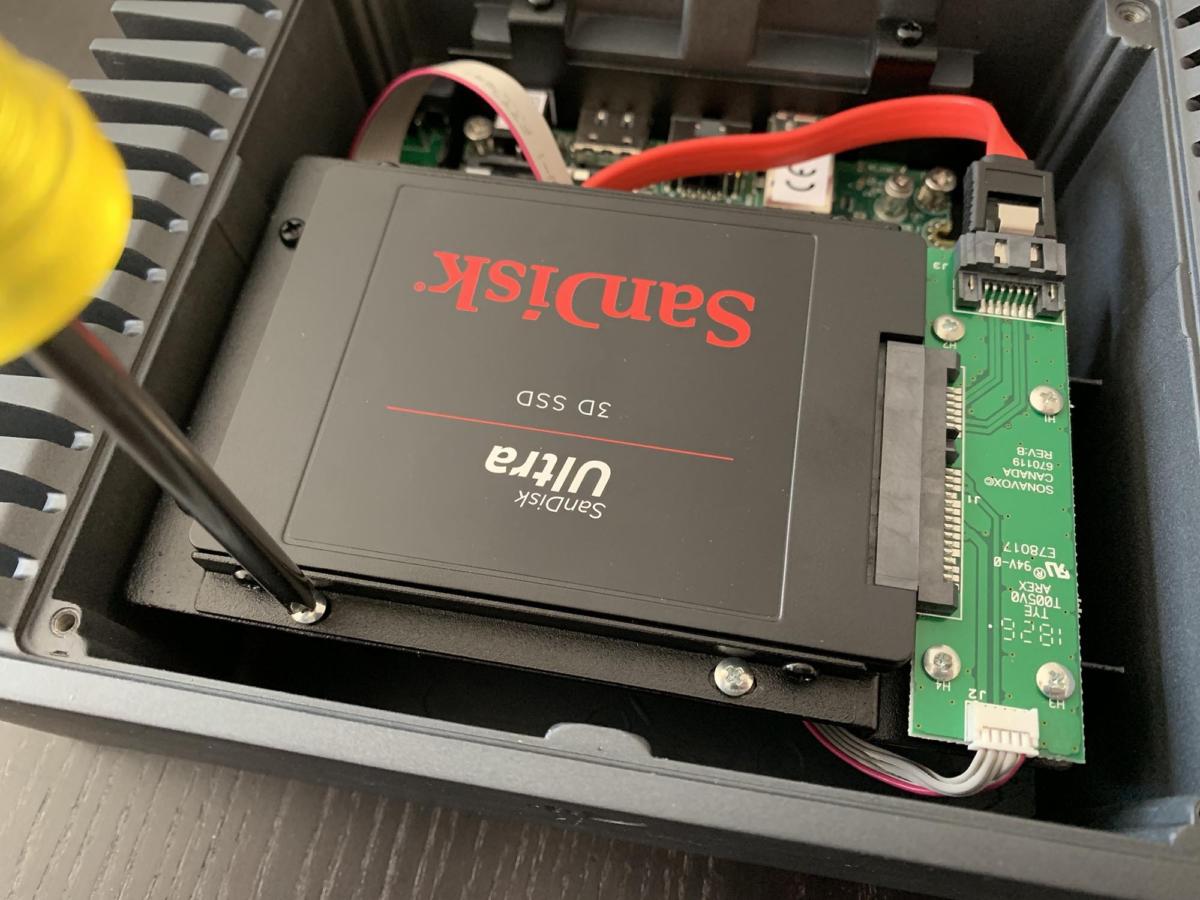 I had some minor issues installing an SSD into the Nucleus’ drive bay, due to its tight tolerances.

I do wish that Roon Labs allowed customers to connect cloud storage services such as  DropBox, Microsoft’s OneDrive, or Google Drive. Users could then stream their music from the cloud, foregoing the need for local storage. Products like Krell’s Vanguard Universal DAC do support such an option.

What’s the difference between the Nucleus and Nucleus+?

Which model is best for you depends on three factors: The size of your music library; the number of zones (rooms) you want to run; and the Roon DSP features you intend to use. The base version of the Nucleus is rated to handle libraries up to about 10,000 albums or 100,000 tracks, six zones, and limited DSP options (you can’t, for example, use both a convolution filter and DSD512 upsampling at the same time). The Nucleus+ is designed for everything above that baseline, and it places no limits on DSP functions.

I was initially concerned that the Core i3 processor would be too limited for my setup. Boy was I wrong. The folks at Roon Labs are spot on when they say the Nucleus has been optimized to run Roon. With the exception of some sluggishness while the Nucleus was indexing my music library, I never encountered any performance or latency issues.

The Nucleus is a breeze to set up using the easy-to-follow, step-by-step instruction manual. You’ll be up and running in no time. If you have an existing Roon installation, Roon Labs provides a knowledge-base article on migrating. 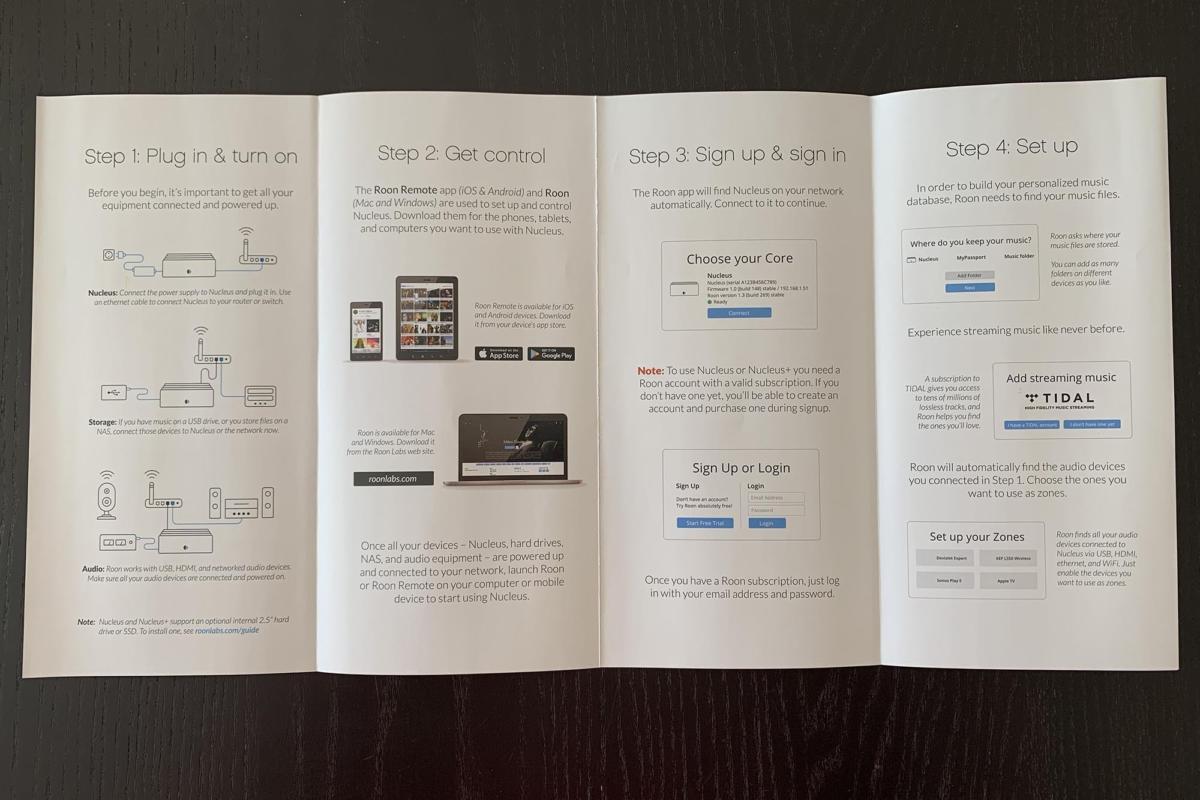 I plugged in the Nucleus and launched the Roon software on my smartphone. The app found the Nucleus in an instant and was ready to go. I turned to the Roon’s web user interface and formatted the SSD I had installed.

I will note that I was concerned that after I formatted the SSD I had installed, there was nothing to prevent me (or someone else on my network) from re-formatting the drive. Theoretically, someone who comes into your home with the Roon app and access to your network can re-format the Nucleus’ internal drive. While the risk of that happening is low, I would like to see Roon provide a password option for that command. 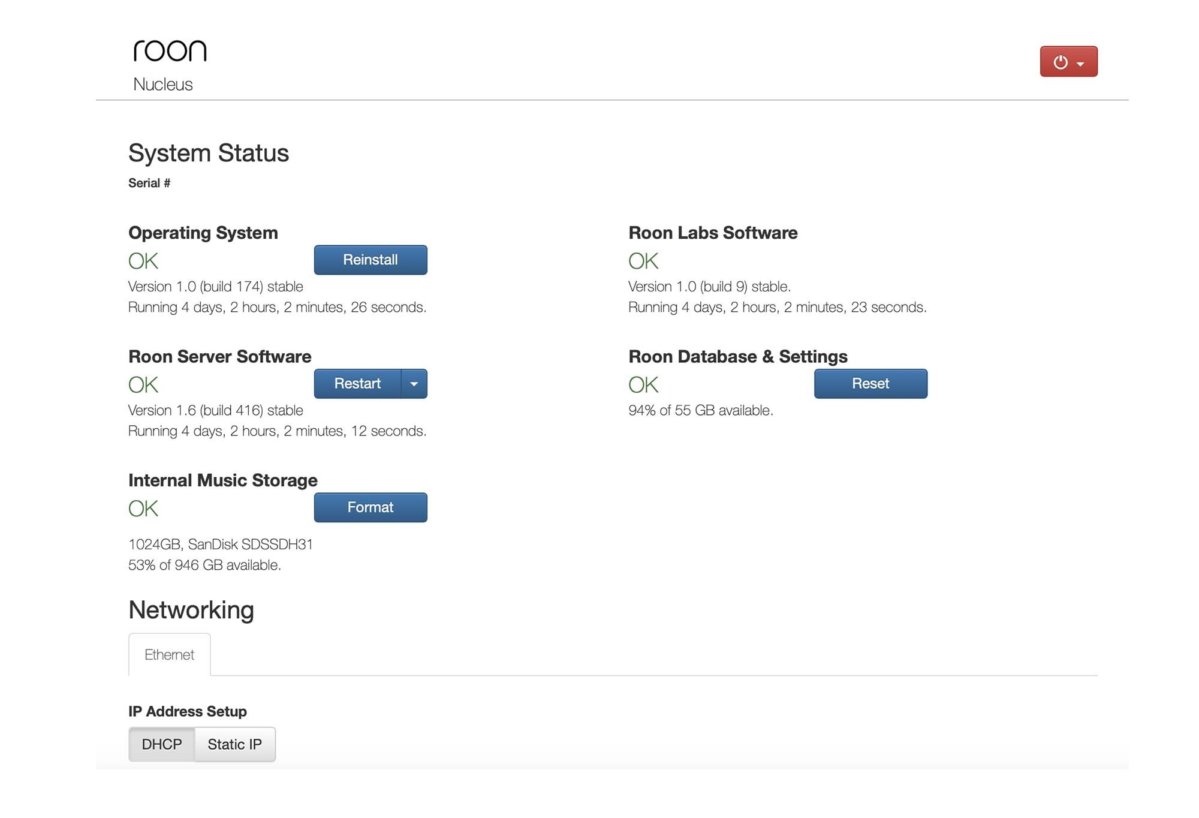 The Nucleus has a built-in web server and web-based GUI for controlling the unit’s basic functionality. There’s no password protection, however, so any malicious person who is able to access your network could erase your Nucleus’ primary storage.

From there, I used my Mac Mini to browse the network and find the Nucleus. I opened the pre-shared folders without issue and began the process of copying over the approximately 14,000 songs from my Mac Mini to the Nucleus’ internal drive that I had installed.

Indexing the music in the library took approximately six days (that’s not a typo). During that time, I did have a minor issue where the Nucleus would randomly disconnect from the Roon app. I brought this to the attention of Roon support and we weren’t able to find a definitive cause. Once indexing finished, I didn’t have the problem again.

I plugged the Nucleus into my Anthem AVM 60 Preamp processor via HDMI, and then passed the Anthem’s HDMI output to my TV. Benchmark AHB2 amplifiers powered the setup. I used both RBH Sound SVTR Tower Reference and Revel Ultima2 Salon2 speakers during my review period. At one point during my review, I also tested the Nucleus’ USB ports as a digital audio source for a Cambridge Audio Edge A Integrated Amplifier. 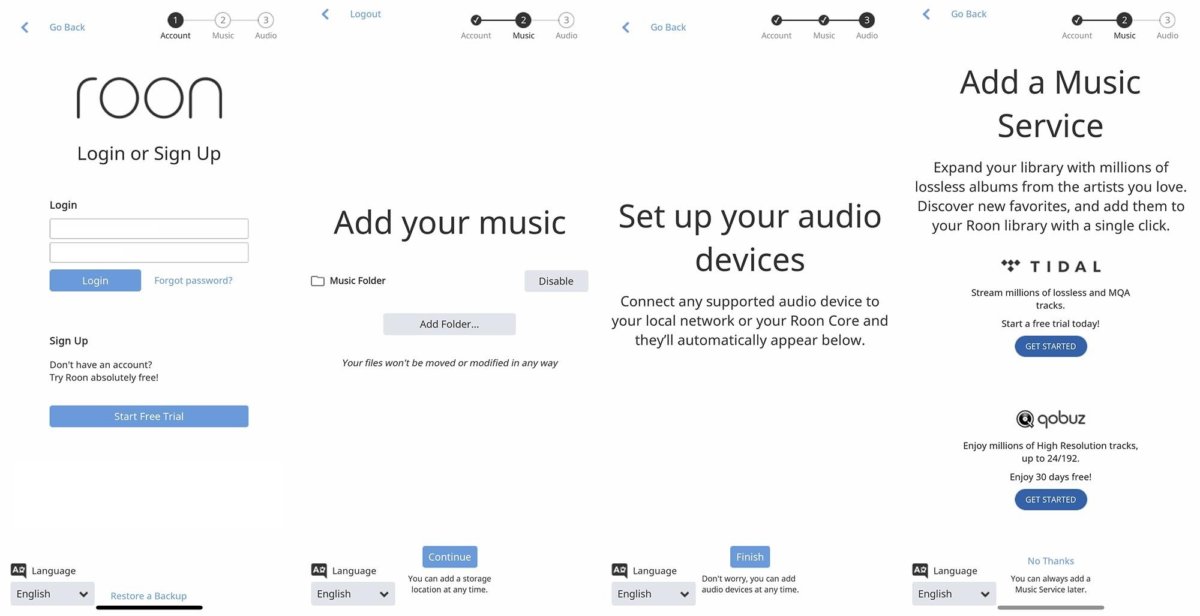 Getting Roon setup on the Nucleus is simple and straightforward.

Once set up, I could do everything on the Nucleus that I could do on a computer running Roon. I set up compatible audio gear and speakers. I setup zones and grouped speaker pairs. The Nucleus even found the Chromecast-enabled Vizio P-Series Quantum TV I had in for review. Via Chromecast, I was able to cast the Roon’s interface onto the Vizio for a rich visual experience to accompany the music.

Speaking of music, the Nucleus was a super sonic performer and didn’t miss a beat compared to a dedicated computer running Roon. To derive the maximum benefit the Nucleus, you’ll want run the Nucleus through a premium DAC. 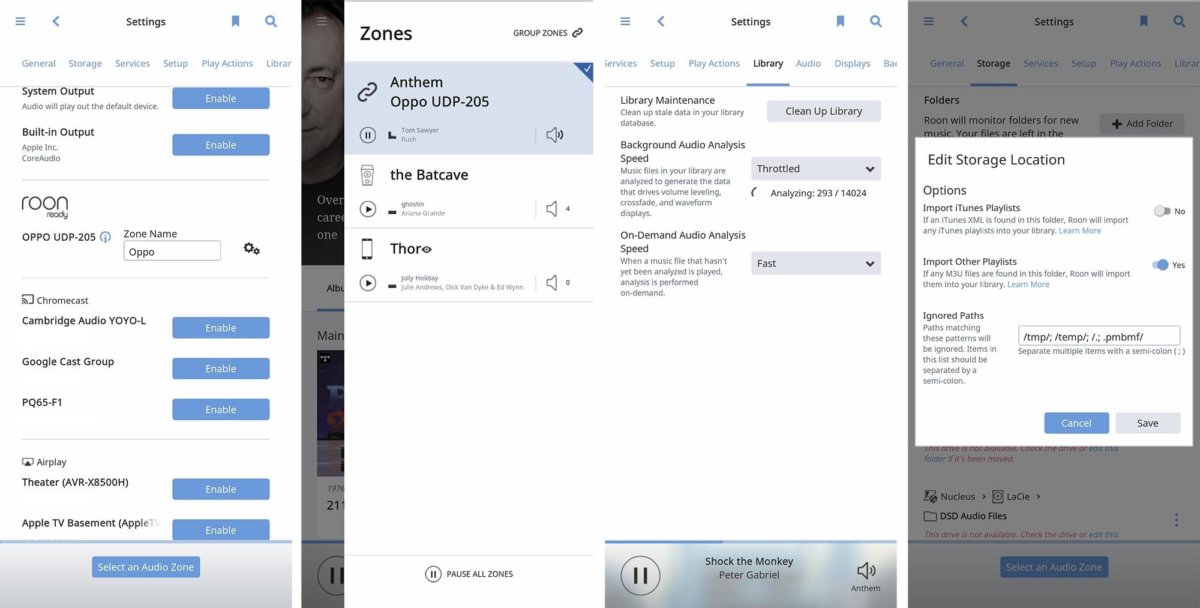 Through the Nucleus, I was able to setup AirPlay, Chromecast, and native Roon-ready devices for whole-home streaming.

I could go on and on about Roon’s feature set, which in and of itself would warrant its own review. Suffice to say, the Nucleus proved to be a superior Roon server giving me everything a dedicated computer running Roon could do.

The Nucleus is a superb—though expensive—option for those who love Roon’s music server software, but don’t want to install and run the software on a Mac, PC, or NAS box. It’s stable, easy to integrate, completely silent, and a joy to use. I set it and forgot it was even there. That’s how all audio gear should be.

If you’re technically savvy and think you’d enjoy building your own Roon-optimized PC from scratch, you can save hundreds of dollars compared to buying the Nucleus. Roon tells you almost everything you need to know about doing that at this link.

If, on the other hand, you’re a die-hard music lover who wants everything that the powerful Roon server has to offer, but you don’t feel confident about—or just don’t want to spend the time—going the DIY route, and you have the budget for high-end hardware, don’t think twice about taking the plunge with the Nucleus. You’ll never look back.